A guitar case, a motorcyle, and a basketball player

“…Several guitar apps feature preloaded scales, chord forms and tablature features for those looking to work out ideas. They make for terrific notation tools for pros and theory tools for novices. But as for actual instrumentality, well, there aren’t many people who say an iPhone feels better in the hand than a guitar…” Article here.

“…Three decades after defying the odds and persuading Carlos Santana to try out his hand-built guitar, Paul Reed Smith’s quest for perfect tone is still reeling in enthusiasts from all over the world…” This year’s sales will match those of last: 38 million. Article here

After 40 years it was goodbye classical guitar, hello blues

“…one day two years ago, I looked at my [classical] guitar and realized I’d been playing for almost 40 years, practising scales, memorizing chord shapes, learning bits and pieces but never really mastering anything. And I was no longer the introvert I’d once imagined myself to be. I’d become a chattier, nosier, bolder and more sociable version of myself. Why not play blues instead?” Article here.

“A woman in the audience said it best in the Q&A session following the Saturday matinee of “Tell-Tale Electric Poe.” “It was like watching ‘Saw III,’” she said by way of complementing actor Bruce Roach. She was referring to Roach’s extraordinary performance of the Edgar Allan Poe story “The Pit and the Pendulum” on the stage of the Coterie Theatre. With only Poe’s words, Rex Hobart’s edgy work on the electric guitar and his own acting ability, Roach created a picture from a Spanish torture chamber so vivid that it was, indeed, like watching a movie…” Review here.

“…First hired as a design draftsman, Boak has held diverse positions at Martin, from running its saw mill and exotic wood products division to guitar design. His creative skills led to the formation of the artist relations department, where he has collaborated with the likes of Paul Simon, Joan Baez, Johnny Cash, Eric Clapton and countless other legends in the conception of more than 150 signature guitars…” Article here (who is he? Hint: he was once a dumpster diver for wood…)

“…He [David Bromberg, that is] doesn’t make them anymore[violins, that is], however. He sells them and appreciates them. That leaves Bromberg, lauded by many as a musician’s musician, plenty of time to concentrate on being an artist again. The 2007 Grammy-nominated Try Me One More Time, a stripped-down collection of folk and blues music, finds him picking an array of acoustic guitars…” Article here. 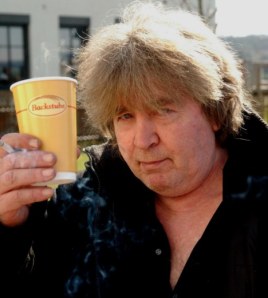 Ronnie Wood eventually replaced Taylor. Yes, it’s confusing if the only thing you know about the Stones is that their lead singer has enormous lips.

So why did he leave? Here’s a hint: ‘After doing guitar parts on three songs, I said to Mick [Jagger] and Keith, “If you guys are just going to sit and mess around, I’m going home. I’ve got things to do.” I told them to give me a call if they wanted me to do anything else”

Excerpt:  “In truth, Taylor has always been ambivalent about the Stones – a fact that explains in part why he has never pursued what he believes may be millions of pounds in unpaid royalties. For all his undoubted virtuosity on the electric guitar, he was never a huge fan of the band and found their brand of bar-room rock and roll musically limited…” ……….Even less edifying [today] is the unopened stack of bills and threats to cut off the water, electricity and gas. The uncut grass, empty cans in the kitchen sink and the ancient car parked in the driveway with weeds growing through its wheels also tell a tale…” Anyway, here’s the article.

Tiago Della Vega may be the fastest guitarist in the world but how fast is he with a six-gun?

Joao Luiz and Douglas Lora: This video is from a ’07 performance; a very recent interview is here.

Interview with “George Harrison” of Rain

Rain is a Beatles tribute band, and Joe Bithorn plays the role of George Harrison in the group: “George had some very, very great taste in guitars,”says Bithorn. “That guitar that he plays on ‘And I Love Her,’ that’s a Jose Ramirez classical guitar. That’s not your average rock and roller picking up an instrument, this is somebody who had some very good tastes in instruments…” Interview here.

From rock guitar to classical: “When he was teaching guitar at Cal Poly, Matt Greif was still doing the occasional wedding and party gig, taking every opportunity to perform before a crowd. But an offer to audition with the Los Angeles Guitar Quartet in 2006 meant he could perform more — to bigger crowds in places like China, Germany and Spain…” Article here.

“…Charles Moore has played bass in his brother “Deacon” John Moore’s band for 41 years. He also has backed the likes of Allen Toussaint, Wardell Quezergue, Marva Wright, Davell Crawford and Germaine Bazzle. But rhythm & blues, rock ‘n’ roll, soul, funk and jazz do not define him. He is first and foremost a classical guitarist, albeit one who mostly pursued his passion in private…” Article here.